SPOILERS AHEAD! READ AT YOUR OWN RISK!

Vanessa Antwort is a minor antagonist and a post mortem character in the 07-Ghost series. Born the daughter of King Antwort, she later became King Weldeschtein Krom Raggs's official wife for political reasons, making her the Queen of Raggs and Teito Klein's stepmother, as well as one of Ayanami's and Fea Kreuz's sisters-in-law.

Vanessa aided the Pope in his plans to revive Verloren, albeit unintentionally. It is likely that she died during the Raggs war, [1] although the exact circumstances of her death are unknown.

'Vanessa' means 'butterfly' in Greek, and 'of Venus' in Latin. Venus is the Roman goddess of love, beauty, sex, fertility and desire. Venus's Greek counterpart is Aphrodite, the Greek goddess of love. Like many other members of the Greek pantheon, Aphrodite was prone to jealousy. This could be a reference to Vanessa's jealous personality.

Vanessa had long, fair hair styled into one large curl on the right side of her head and fastened by two dark, triangular, tasseled accessories. She had bangs that were curled inwards and long enough to reach her jawline. Her gown was long-sleeved with a dark, corset-like layer underneath, a very high collar that covered her neck, and a large oval-shaped jewel on her collarbone. She also wore a rather striking shade of lipstick. 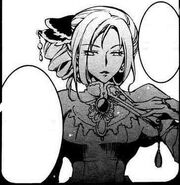 Vanessa in her royal finery. 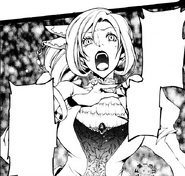 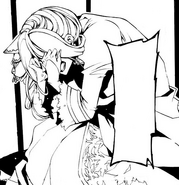 Vanessa breaks down
Add a photo to this gallery

Vanessa's personality was rather similar to her father's. She placed a great deal of importance on social status and looked down on Millea for having a lower rank. She was also bitter, jealous and possessive, hating Millea and Tiashe to the extent of refusing to accept Krom's love for them. Vanessa was cruel enough to willingly sacrifice an innocent child to achieve her own goals. However, she did feel genuine remorse and eventually confessed her crimes. Like her father, she was prone to angry outbursts and often verbally abused others.

Although their marriage was arranged, Vanessa truly loved Krom and was rather possessive of him. However, although he was kind to her, he did not truly love her as he did with his concubine, Millea. Vanessa knew this and was almost driven to insanity as a result. Despite their somewhat strained relationship, Krom easily forgave Vanessa when he discovered her crimes, and was clearly shocked when she had a hysterical outburst over his love of Millea and Teito, indicating that he did not think badly of her.

Vanessa harboured a great hatred for Tiashe, seeing him as an obstacle to Krom's affection- as she knew Krom was reminded of Millea Klein whenever he saw Tiashe.

Vanessa wished that he had never been born because then Krom would have still loved her(not that he ever actually did). Vanessa even going as far as saying that a concubine's child must always stay in the shadows and mustn't with the outside world .

However, she may have felt remorse for putting a slave mark on Tiashe's body, as she eventually confessed to Krom that she had given Tiashe to the Pope, who tricked Vanessa into believing that her sin would be forgiven if she handed Tiashe to him.

Fea Kreuz: Vanessa and her brother-in-law Kreuz did not interact much. They have very few scenes together in the manga, and even when they were in the same room, there was usually someone else there as well e.g. Teito or Krom. His attitude towards her was formal and polite (on the surface), addressing her with the formal title 'Ouhi' (Japanese for 'Queen'), but he was also familiar with the negative aspects of her personality and did not hesitate to suggest that she might be guilty of something. Before the Raggs War broke out, Krom put Teito in the custody of Kreuz to keep Teito safe and away from Vanessa. Taking Kreuz's attitude towards anyone who hurts Teito into consideration, Kreuz was probably not on good terms with her, but kept his feelings well-hidden and did not openly show dislike towards her, though interestingly he still seemed just as shocked as Krom was when she had a hysterical outburst, implying that while he may dislike her, he is not truly cruel to her.

It is unclear if Vanessa knew that Kreuz was her brother-in-law. However, since Krom is stated to have been the only human in Raggs who knew about Kreuz's Ghost identity at the time, this is unlikely. Judging from their few interactions, she saw him as a mere priest and Teito's teacher.

Ayanami: Vanessa has never been shown directly interacting with her other brother-in-law, Ayanami, but he apparently knew about her, as he once talked to her father, and has mentioned her to Hyuuga. He is her father's killer, implying that he had no more respect for her than the other members of the Raggs royalty whom he killed. In fact, considering how Ayanami sees betrayal and hypocrisy, it is possible that Vanessa is Ayanami's least respected family member.

Parents: Vanessa's relationship with her parents has not been shown. So far it is only known that King Antwort gave Vanessa's hand in marriage to Weldeschtein Krom Raggs for political reasons. Considering that Antwort eventually seceded from its alliance with Raggs and stole Pandora's Box from Raggs, it is possible that, unlike his daughter, King Antwort did not like or respect Krom and Antwort's alliance with Raggs. Vanessa's mother has not appeared in the series so far, and nothing is known about Vanessa's relationship with her.

However, Vanessa can be considered as spoiled, since she needs others to change in order to cater to her instead of she changing herself or her plans to cater to others. In light of that, it is likely that either her parents have been indulgent of her, often yielding to her wishes, or they have been neglectful of her, so she grew up possessive and inconsiderate. probably the latter considering how quickly and unhealthily she was willing to latch on to a guy she was married off to even though she barely knew him and he mostly just ignored her for another girl. She very clearly has no idea what a healthy relationship is supposed to be like.

It seems likely that Vanessa's personality was influenced by her father's. He doesn't really seem to have cared much for her as he married her off to form an alliance with Raggs but then turned around and abruptly broke off the alliance, so he basically just used her as a tool to steal Pandora's Box.

Millea Klein: Vanessa was bitterly jealous of, and hated, Millea for having Krom's love. She did not respect Millea due to the latter's commoner status, and always referred to Millea as 'mistress', 'that mistress' or 'that woman' instead of using Millea's name. It is unknown how Millea felt towards Vanessa. In a long dream that Millea had, in which people she (Millea) once knew greeted her and informed her that Teito is still among the living, Vanessa was not seen. This could mean that either Millea also dislikes Vanessa, or is aware of Vanessa's animosity towards her.

Vanessa appeared to respect and trust the Pope. When he told her that her sins would be forgiven if she handed her stepson Teito over to him, she believed him. Together with the Pope, she killed another child and deceived everyone that Teito was dead.

However, unbeknownst to Vanessa, the Pope had his own plans for Teito, and it is likely that she was unaware of the Pope's intentions to revive Verloren.

Vanessa was born to the late King Antwort and (presumably) his queen, the latter of whom has no onscreen role in the series. Upon reaching adulthood, King Weldeschtein Krom Raggs was forced to marry her and did not love her, but she truly loved him.

Her husband was kind to her, and she was given the greatest consideration-Teito was kept away from her out of respect for her wishes. However, she was not satisfied with this.

While initially pleased with Millea Klein's illness, Vanessa came to realise that Krom's love for his concubine would continue through his love for his son Teito Klein, who resembled her greatly. These feelings were further intensified by the King's announcement that Teito would be made the official heir to the Raggs Kingdom, despite being an illegitimate child. Maddened and heartbroken by the fact her husband would never love her in the way he loved Millea, Vanessa sought to dispose of the young Prince so Krom's love for Millea would die with his son.

When Teito Klein was left in the care of a Royal Attendant, Vanessa lured him away from his guardian by promising to help him find flowers for his father. She then took him to a dungeon and branded his back with a Sklave brand which would forever mark him as less than human. However, after doing so, she was overcome with fear- as discovery of her crime would likely result in her execution, and was thus easily manipulated by The Pope- who proposed they kill another child in Teito place and the Prince's attendant be used as a scapegoat. This would save Vanessa's life, but in return Vanessa would give the Prince to the Pope. Vanessa agreed.

She was shown to feel guilty about her actions. Although she initially tried to lie that she knew nothing, she eventually broke down and admitted what she'd done after Fea Kreuz and Krom asked her if she knew anything about where Tiashe was.

Her current status is presumed to be deceased.

Retrieved from "https://07ghost.fandom.com/wiki/Vanessa_Antwort?oldid=43136"
Community content is available under CC-BY-SA unless otherwise noted.