Suzunami is a minor character in the 07-Ghost manga series, not having been introduced in the anime series so far. He is a battle sklave from Antwort who, along with his twin brother Yukinami, was freed by the Black Hawks during the Antwort War. Suzunami later joins the Black Hawks after taking a liking to Ayanami. He is only able to speak Raggs, meaning many are unable to understand him. Suzunami appears to be the older twin, and is distinguished by his dark coloured hair.

Suzunami, translated to "breaking waves" was the name of a Yūgumo-class destroyer of the Imperial Japanese Navy.

Suzunami appears as a young boy believed to be around the age of 17. Though his official height is unknown, Suzunami appears to be of average height, as he was shown to be around two heads smaller than Hyuuga, putting him roughly at five foot six inches. Due to his slim build and androgynous features, he is often mistaken for a girl.

Suzunami has a round face with fair skin, large, light-coloured eyes, a small nose, and a large mouth, and is distinguished from his brother by his dark hair, which is cut neck-length, straight, with a fringe and longer bangs to frame his face. Suzunami can be considered cute in the series universe, as an omake from Supreme Sugar 01 shows that quite a few girls like him.

When first introduced, Suzunami wears a long, ankle-length overcoat with square buttons on the chest, and fur around the neck-guard and sleeve cuffs. He also wears woolly glooves and knee-length boots. He also wore a slave collar.

After they join the Black Hawks, Suzunami wears the military uniform normally worn by cadets, consisting of a black, or dark blue, ankle-length overcoat with golden trimmings on the chest, sleeve cuffs and neck-guard. He wears black trousers, knee-length, black, buckled boots and white gloves, similar to the other Black Hawks, as well as a white shirt underneath the overcoat. His uniform has a small half mantle hanging off his left shoulder emblazoned with the Barsburg military insignia and a golden shoulder board on his right.

While pursuing Teito, he wears a knee-length, light-coloured cloak with a hood, and a short, furry scarf.[4] 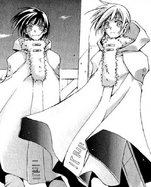 Suzunami, whilst pursuing Teito.
Add a photo to this gallery

Suzunami's personality is drastically different from his brother's. He is bold, loud and impulsive. Suzunami has a tendency towards outbursts, and says what's on his mind much to the ire of his younger brother, being couragous and not afraid to talk to anyone. He is very energetic and enjoys the thrill of fighting, as he is always seen smiling during battle, and rushes around a lot.

Suzunami shows a creative side, making a paper aeroplane[5] and carving a tulip stamp himself.

Suzunami is shown to be power-driven, taking a liking to people who have it, and always wanting to gain more of it himself.

In the omake Begleiter, Suzunami also appears to be jealous of Ayanami, as he feels Yukinami admires Ayanami more than him, going far enough to sabotage Yukinami's notebook, replacing the photos his brother has of Ayanami with photos of himself.

They get along well, possibly because of Hyuuga's strength and they are both outgoing. Suzunami appears to like Hyuuga a lot, as he is frequently shown talking to Hyuuga in an exited manner (such as during the Antwort War and when he crafted his own stamp) despite knowing Hyuuga is unable to understand him, as Hyuuga cannot speak the language of Raggs.

Suzunami was not sad when Ayanami told him and Yukinami that King Antwort was dead, indicating that he may have disliked or felt indifferent towards his former king.

Suzunami is very close to his younger twin brother and very protective of him. They also know each other's moves in battles very well and can understand each other's thoughts by just looking at each other, as if there is telepathy.

Suzunami has a tendency to become easily jealous when Yukinami is given attention by other people, shown in an omake when he thinks Yukinami's admirers are annoying and tries to get rid of them by burning all the love letters addressed to his younger brother. Suzunami is also very jealous that his younger brother idolises Ayanami, and he finds Yukinami's notebook, gets rid of the photos of Ayanami in there, and replaces them with photos of himself.

Suzunami got along well with Teito in the brief time they spent together. However, it seems that he may care somewhat less for Teito than Yukinami, as during the Hawkzile race, Yukinami hesitated to attack Teito while Suzunami showed no signs of hesitation.

Suzunami, along with Yukinami, is briefly seen in manga chapter 93 with Barm and Moz, and the four are seen staring in shock at the destruction of Hohburg Fortress caused by Verloren's rveival.

Suzunami was shown to be very skilled with a sword as well as very quick and agile. He managed to evade Hyuuga for up to a minute, which puts him on par with Teito in terms of strength, according to Hyuuga.


Suzunami is first introduced as one of King Antwort's combat slaves during the Antwort War. As Hyuuga is searching the King's palace, he is confronted by Suzunami and Yukinami, who warn him that he cannot pass them. The pair than smash the two pillars at each side of them, and while Hyuuga is distracted by trying to dodge them, they catch him by surprise and hold him at swordpoint. Though they present Hyuuga with a challenge, they are unable to best him- and his is able to catch and handcuff them in a minute.

Suzunami and his brother are then brought to the invading army's Chief of Staff, Ayanami where Hyuuga suggests he let them become Barsburg soldiers because of their strength. Ayanami instead opens the twins' handcuffs and sets them free; telling them they can now go anywhere they want to as the King they serve is now dead.

Once released, Suzunami immediately recognises Hyuuga and Ayanami as Black Hawks and expresses a desire to join the Black Hawks as he admires their strength. Yukinami desperately tries to stop his outburst- but Suzu carries on, and Hyuuga, unable to understand what he is saying to him, smiles and pats him on the head. Ayanami, able to speak the language of Raggs, tells him and Yukinami that they can join if they want to. Suzunami agrees and continues to talk to Hyuuga. The two sklaves follow the Black Hawks to Barsburg.

Suzunami and his brother wait with the rest of the Black Hawks as Ayanami is in a meeting with Wakaba Oak. When the two (Wakaba and Ayanami) arrive, a tearful Shuri Oak runs into his father's arms and is comforted by him.

Suzu and his brother immediately walk up to Ayanami and stand closely behind him, and this causes Wakaba to mistakenly believe they are his begleiters. Wakaba expresses pity Shuri cannot be Ayanami's begleiter, and places Shuri under the care of Konatsu Warren.

The Black Hawks later return to their office. Konatsu instructs the twins on what to do with their paperwork, but due to the language barrier Suzunami misinterprets the instruction and instead of using the unit staff seal, he uses his own hand-made tulip seal to stamp the documents. Konatsu begins to panic and search for the staff seal, but Hyuuga is impressed with Suzunami and begins using the stamp himself.

After Teito Klein and Frau had escaped through the Mountain Road, Ayanami sends him and his brother after them.[10] They are later seen in the city of Baltos, watching Teito and Frau rush to safety after Ayanami sent a one-winged Kor after them.[11] It is possible, they were the ones who informed Ayanami of Teito's whereabouts.

Suzunami and his brother are later seen on board a ship being driven by Teito and Frau. It is later shown that they were on board because they were both given military passes by Ayanami, which allowed them access to most rooms in Hohburg Fortress, but were stopped by guards at one of the gates who did not believe that children like them could be in possession of such passes. They befriend Teito and are saddened when they must leave him, but despite this, they express that they will fight him (Teito) if Ayanami asks them to.

During the Hawkzile Race, Suzunami and Yukinami fight Teito, but Yukinami is unwilling to do so, causing Suzunami to chide him. Suzunami then briefly reappears in manga chapter 93, where he and Yukinami are seen with Barm and Moz in District 24. The four males observe the destruction of Hohburg Fortress, visible from afar.

The twins are last seen at an airport in the Empire, hinting that they may have left the Black Hawks.

Retrieved from "https://07ghost.fandom.com/wiki/Suzunami?oldid=43000"
Community content is available under CC-BY-SA unless otherwise noted.