Mikage Celestine is a main character in the 07 Ghost anime and manga series. He was a student at the Barsburg Military Academy who wanted to become a soldier to protect his family, and was Teito's best, and only, friend. Mikage managed to pass the exam, but was unable to accomplish his dreams of becoming a soldier after helping Teito escape. He is arrested and later sent to attack Teito at the Church where he fled as a one-winged Kor. In the anime Mikage is killed by Frau while in Ghost form, but in the manga he kills himself. He is later reincarnated in the form of a Fyulong dragon called Burupya. Despite dying early in the series, Mikage remains a popular character with fans of the series, coming 3rd in the 07 Ghost popularity poll.

'Celestine' is a name of English and French origins that means 'heavenly'.

Mikage's earliest appearance was in the first pilot chapter Seven Ghosts. His character design has not changed at all for the finalised series; his appearance is identical down to the X-shaped scar on his cheek. He was originally known as Ciel, it is unknown why the creater decided to change his name to Mikage.

Pre-chapter 1 Mikage's backstory is almost identical to modern Mikage's. He helped Teito escape after the latter attacked Ayanami, though it is not shown whether Teito attempted to take him hostage like in the first chapter. Nevertheless he was killed, and it is heavily implied that Lloyd was the one who killed him.[3] Mikage's death motivates Teito to take revenge against the military like it does in the finished series.

Mikage does not return as a dragon in Seven Ghosts. Instead it is Teito who becomes a dragon when he disobeys his master because of the promise collar. 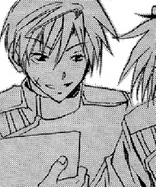 Mikage as he appears in Seven Ghosts.
Add a photo to this gallery


Differences in the manga and animeEdit

Ayanami gives Mikage a choice between his family and Teito, threatening to kill Mikage's family if he does not bring Teito back to the military. In the anime, Mikage chooses to save Teito. In the manga, Ayanami instead puts a seal on Mikage, meaning Mikage himself will die if he refuses to make a decision. Mikage refuses to choose Teito or his family to die, so is killed when Ayanami releases his soul.

Retrieved from "https://07ghost.fandom.com/wiki/Mikage_Celestine/Trivia?oldid=41415"
Community content is available under CC-BY-SA unless otherwise noted.