Officer Lloyd is an officer that teaches at the Barsburg Military Academy, appearing to teach both written work and combat lessons. In the manga, he is referred to as 'Sensei' by the students he teaches. His name is given as Lloyd in the Seven Ghosts chapter, where he was the major antagonist, and attacked Teito after Teito escapes to the Church. However, he is neutral in the finalized series.

The name 'Lloyd' originates from the Welsh word: llwyd, which translates to 'grey'. This could be a reference to his grey/purple hair.

Lloyd does not appear to be very tall, being estimated 170cm (in the anime at least) as he was shown to be a few inches smaller than Miroku. His build is slender and his weight is unknown. He has a long, oval-shaped face, with a long, thin nose, large mouth and full lips, and large, purple-coloured eyes. His hair is a light shade of purple/grey, cropped short at the back but with two longer bangs at the front at each side of his face. He has a full fringe with longer bangs to the left and right of his face. His two longer bangs are tied with cylindrical, red clips. In the Seven Ghosts chapter, Lloyd's hair is not tied back, and it reaches his knees.

Lloyd wears the Barsburg military uniform under a white robe that almost reaches his ankles. The robe has a high collar at the back that opens at the neck in a v-shape at the front. On the shoulders are rectangular, red clips and on the back of the robe is the insignia of the Barsburg military. At the front is a large, gold, decorative clip, that extends from his left shoulder and forms an upsidedown 'v' on his chest. The edges of the clip are two red jewels. Engraved across the clip is something written in Zaiphon symbols.

Lloyd appears concerned about his own reputation, as he scolds Teito for not killing the criminal, as if one of his students hesitated it would make him look bad.

Little is known of Lloyd's past other than he is a teacher at Barsburg Military Academy. It is likely that he went to a similar academy when he was younger, and he appeared to have worked at there for a while, as he was shown to be familiar with Miroku Barsburg and the officers around him.

He is first in the assembly hall as Shuri gives his speech. He talks to Shigure about the candidates for the Begleiter Exam, where he comments on the difficulty of the exam.

Lloyd is finally seen at the examination, where he watches the students as they take their exam. When Teito refuses to kill the criminal, he becomes annoyed at him and tells him that he must kill him.

In the manga, Lloyd can be seen standing next to Ayanami when Teito launches his attempt on Ayanami's life.[2] It is likely that Lloyd returned to teaching after Teito escaped. As he has not been seen again since the first episode/chapter, his status is unknown.

Differences in the manga and anime[]

In the manga, Lloyd is present when Teito attempts to kill Ayanami. In the anime, he is not there.

Officer Lloyd appears in the pilot chapter, Seven Ghosts, as well as making a brief appearance in the Begleiter chapter.

In Seven Ghosts he was a major antagonist. It was heavily implied that he was the one who killed Mikage, instead of Ayanami, and he pursued Teito when he fled to the Church. He arrives with a small army, with Teito believing he planned to kill all witnesses, and duelled Teito. He put the promise collar on Teito and was winning until the Eye of Mikhail is unleashed. Teito then kills Lloyd.

In Begleiter, Lloyd appears to have been a scientist rather than a teacher, as he is seen in a lab and creates formulas. He appears very briefly where he shows Ayanami the new formula he had created. He looks defeated when Ayanami, unimpressed with the current one, asks him to make another one.

Lloyd as he appears in the pilot Seven Ghosts. 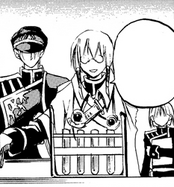 Lloyd in the Begleiter chapter.