Liam is a minor character and one of two brothers who were acolytes training to become bishops. It would appear the two made the decision to become bishops after their parents died and the brothers' relatives took the opportunity to try and steal the extravagant inheritance left to the two young boys. Liam is the younger of the two, recognised by his smaller stature and light pink hair. In the manga Liam took the Bishop's Apprentice Exam, but failed, and is now training to retake the exam next year.

'Liam' is a derivative of 'William', a name of Old German origins that means 'will helmet, protection'. This could allude to Ouida's protectiveness towards him.

Liam appears as a young boy who is probably in his preteen years. He has a small, slim build, being an estimated 5 foot 3 inches in height, and his weight is unknown. Liam has a round face with chubby cheeks, a small nose, a small mouth, with large, dark purple-pink eyes. His hair is a pale pink colour, neck length and worn rather messy, with his fringe parted to the right.

He is first seen in the Bishop's apprentice uniform which appears as a long, white robe down to the ankles, having two slits, going from the bottom of the rob to the hips, at each side of the body, and long, white sleeves with large, dark blue sleeve cuffs. Down the back of the robe is a criss-cross stitching like that of a corset with dark blue thread. A small, white poncho (mid-back length) with a high collar and dark blue round the edges is worn over the robe, and he wears his exam badge at the front of his collar. He wears dark blue trousers and knee-length brown boots.

Liam in his Bishop's apprentice uniform. 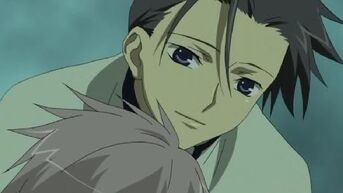 Ouida and Liam.
Add a photo to this gallery

When introduced, he appears very chatty and friendly, as when he found out about Teito Klein training with Castor he excitedly spoke to Teito about the rumours surrounding Castor, despite just having met Teito. He is eager to make new friends and nice to those he meets, as he waves at Teito and Hakuren Oak before the exam.

Due to his young age Liam is curious about new things and often naive. However, he has demonstrated considerable guile, as he managed to trick his older brother, using a distraction, in an attempt to get his brother to pass the exam. During the exam he also appeared overwhelmed and frightened by strange things, yet his confidence appears to have grown since then, as he is seen waving goodbye to his brother (who he will not see again for a considerable amount of time) as he leaves, and rushing towards a group of friends he has made.[1]

Liam is not a worshiper of the Seven Ghosts, and this may be the reason he failed his exam.[2]

Various relatives: Liam's relatives used his parents' deaths to take the house and inheritance, and attempted to separate him from Ouida. Ouida says that Liam was very frightened by them.

Ouida is Liam's guardian following the death of their parents, and is almost like a substitute father for Liam.

Liam looks up to his older brother, has a lot of respect for him, and cares for him deeply, saying that he does not need to pray to the statue of Fest because he could not love Ouida more than he already does. Liam instead prays that the bond between them will never break. He wishes for Ouida to succeed in his dreams to become a Bishop and became upset when he thought he was preventing Ouida from succeeding.[4] Liam was willing to sacrifice his place in the exam so Ouida could have it.

Teito Klein: Liam does not interact much with Teito, but they get along fairly well. When Liam found out that Teito was training with Castor, he excitedly spoke to Teito about the rumours surrounding Castor, despite having just met Teito.

Liam is able to use a Baculus, having an attacking Zaiphon, but was not skilled enough to pass the Bishop exam.

It is revealed that Liam was born into a very wealthy, possibly noble, family, native to District 5. He was the younger of two sons.

Liam's parents died sometime before he and Ouida fled to the Barsburg Church.

It is unknown if his parents were assassinated by members of their own family, but after their deaths there was a large fortune left unclaimed, and relatives of the boys took advantage of this and claimed it, and their parents house, for themselves.[5] It seems his relatives also tried to separate Ouida and Liam, and it could be that they (Ouida and Liam) travelled to the Church to protect themselves from potential assassination, as they were set to inherit their parents' money.

Liam is first seen after Teito returns something Ouida dropped. Liam begins to question Teito on his private lessons with Castor, and is then introduced to Teito and Hakuren by his brother.

Liam and his brother are then seen in one of the Ghosts towers, looking at the statue of, Fest. Upon arrival Liam asks whether this is the statue in which Ouida replies "it sure is, he's the God that Links peoples hearts together." Ouida then explains that the examinations are taken in pairs and that the examiners will be testing their bond as they go along. Liam says that despite not worshiping the ghost, he will pray that the bond between him and Ouida never breaks.

Part one of the examEdit

The next time the brothers appear is right before the exam starts, where Liam waves at Teito and Hakuren.

He and his brother appear near the end of the first exam: at the final challenge, which is to decide which one of them passes, as only one can walk through the door of the victor.

Part two of the examEdit

The events of Liam's final exam were not shown, but he did not pass. It is possible his worst fear were his relatives- like his brother's fear.

Upon failing the exam, Liam opts to retake the year in the hopes that he will pass the exam next year. He is seen with his new friends, preparing to leave the Barsburg Church as all the acolytes are moved back to their dorm rooms. It is likely he will not see his brother Ouida, who is leaving the district, for some time.

Differences between the manga and animeEdit

In the manga, Liam is first introduced in the church refractory, where his brother drops something and Teito returns it. In the anime, Liam is first seen late for a sermon.

Retrieved from "https://07ghost.fandom.com/wiki/Liam?oldid=41790"
Community content is available under CC-BY-SA unless otherwise noted.