Start a Wiki
SPOILERS AHEAD! READ AT YOUR OWN RISK!
Labrador, born Ilyusha Krat, is one of the main characters of the 07-ghost manga and anime series. He serves as a Bishop of the Barsburg Church located in District 7, and his job there is to protect the citizens by removing Verloren's messengers, the Kor. Labrador is seen spending most of his time in the gardens of the Church where he takes care of and converses with the plants there and makes them into herbal remedies. He is also able to manipulate them using his healing Zaiphon, meaning he is able to weaponize them.

The manga later reveals that he was originally born into the Krat Family, being a descendant of the ghost Profe, and after he died began serving as one of the Seven Ghosts. Labrador is the Ghost known as Profe, the one that is able to see one's future.

In the final manga chapter, he became an ordinary human and lost his Ghost powers.

1 of 4
Add photo
Labrador is a handsome young man. He is the smallest of the three main Bishops, standing at 170 cm, and his build is very boyish and slender. Despite his youthful appearance of a young boy in his late teens, an omake revealed that Labrador is the oldest of the 3 bishops. He has pale, peachy skin; the lightest among the three bishops.

Labrador's face is boyish and youthful, rather androgynous in appearance, and very round with a small nose and a small mouth with full lips. His eyes are very large with no discernible pupils in the manga (although he is drawn as having normal eyes in the anime), and dark eyelashes. They are a dark purple in colour, and are usually not fully opened, giving him a sleepy look. Labrador's hair is wavy, usually messy, cropped neck-length, and a white/pale-purple color, with a fringe that stops just above his eyes and longer bangs at each side of his face.

Labrador has been described as beautiful rather than handsome. As a teenager, Labrador's hair was longer than it is at present, and he kept it in a ponytail.

Being one of the Seven Ghosts, Labrador appears as a skeleton when in his true form.

In his casual attire, Labrador wears something akin to a black (purple on the cover page of Kapitel 96), form-fitting, leather catsuit with large shoulder pads. The catsuit has fur of a lighter shade of black on the neck-guard and sleeve cuffs. He also wears a long corset-type piece with a v-shaped/split tail coat and knee-high gothic-style boots.

In his church attire, Labrador appears to wear a dark blue cassock with white trimming on the collar, under a long white outer cassock that hides his arms. The cassock is held together with a loose belt and a large, silver, rectangular brooch emblazoned with the carving of a cross. Labrador wears a plain, white mitre with a cross in the center and a veil that extends from the mitre to fall over his face.

Following the death of Bastien, Labrador changed to mourning attire, consisting of a simple black cassock that almost reaches the ground and a gold strip of cloth, that appears to be a modification of a stole, around five feet long, and worn around the collar. He wears a clergy badge on his collar. During the funeral service he also wears a black mitre, not unlike his church one, with a golden cross emblazoned in the centre and a veil that extends from the mitre to fall over his face.

In Kapitel 80, Labrador attended the masquerade and wore the appropriate noble clothing. Before entering, he was seen wearing a woman's clothing, but shed the feminine attire when he, Castor and Frau successfully infiltrated the masquerade.

Labrador is his casual wear.

Labrador in the typical Bishop garb. 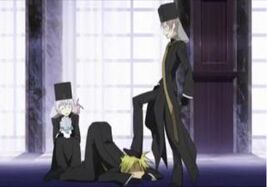 The Bishops in mourning attire.
Add a photo to this gallery

Labrador is shown to be very kind and gentle, always speaking softly and kindly to those around him, sometimes even his enemies. He is very patient, and almost impossible to anger (usually becoming upset instead of angry), and does not show his frustration on his face. He has a love for gardening and holds extensive knowledge about plants, seeds and flowers; an obsession which sometimes leads him to sleep in the flower patches or under trees. He also seems to be in charge of taking care of the plantations in the Barsburg church.

Possibly due to his precognitive visions, Labrador often appears dreary and behaves in a sleepy or dazed manner. Despite this, he is a capable fighter, being able to defend himself when attacked, and can be dangerous when he fights seriously.

Labrador is very sympathetic and can be considered a pacifist, as he is very rarely seen in combat, objecting to killing even if his opponent poses a serious threat to his life. However, this quality makes him susceptible to being taken advantage of. Labrador also has a mischievous and sarcastic side, often insulting Frau's intelligence, and may have a sadistic streak, as he seems to enjoy watching Castor beat Frau up, and smiled when he informed Teito and Frau that the promise collar would explode if they (Teito and Frau) are apart for forty-eight hours.

Despite his pacifistic nature, Labrador will not hesitate to kill or gravely injure his opponents under certain circumstances, as shown when he killed the Barsburg Spy in the manga and severely weakened Haruse with darkness-eating flowers. While it is not often shown, he does have a dangerous side and is not easily intimidated by even the most powerful of his opponents, shown when he openly challenged Ayanami in mid-air during the fight for the Eye of Mikhail, and when he sardonically told Hyuuga to cut off "whichever [of my limbs] you like".

Due to his experience with plants, Labrador shows a talent for making them into food and medicine.

Healing Zaiphon: Labrador says that he is an expert in a healing-based Zaiphon, which means he is able to remove a Kor which leaves the patient fully unharmed. He is able to exorcise a Kor in a manner that simply binds and exorcises as opposed to destroying them. Labrador is also able to heal the injuries he has sustained whilst in battle or the injures of his allies with high proficiency, extending as far as to healing Castor's detached arm (but not regenerating it).

Manipulation Zaiphon: Labrador is able to control plants and use them as vines to entangle opponents (or possibly choke them, although his nature usually prevents him from doing this). A theory as to how he grows the flowers is by forcing his Healing Zaiphon through seeds and controlling them using his Manipulation Zaiphon. He also makes good use of plants to discharge certain effects such as putting people to sleep or eating away dark powers.

He was also able to calm and befriend a wild plant which took out many racers during the Hawkzile race in Kapitel 59. He became such good friends with it that it even gave him some seeds which he used later in the fight against the Black Hawks.

Labrador's power as the Ghost Profe is that he is able to look into a person's future.

Labrador's Ghost power is that of a prophet, allowing him to see into future events and making proclamations on it. His predictions will always come true.[1] He had spoke of future events in Teito's life, made weather forecasts, and had seemed to see into what would Frau and Teito need during their travel to Seele (seeing as to how Frau always managed to have something in his hands and saying that it's from Labrador).

Another proof of Labrador's foretelling is when he was battling Ayanami. He foretold that what Ayanami desired the most (probably Eve) cannot be held in his hands again.

In truth, the Krat family (Labrador included) also possessed the ability of a prophet.

Like the other Ghosts, Labrador has a higher resistance to extremely low temperatures than ordinary humans, as his heart does not beat and his body does give off heat. This was shown when he slept outside some nights and did not seem affected by the cold. As a Ghost, he also recovers more quickly from injuries than ordinary humans, and can shift between his human and Ghost forms at will.

He is probably able to speak the Language of the Gods.

Retrieved from "https://07ghost.fandom.com/wiki/Labrador?oldid=42759"
Community content is available under CC-BY-SA unless otherwise noted.