Start a Wiki
Labrador, born Ilyusha Krat, is one of the main characters of the 07-Ghost manga and anime series. He serves as a Bishop of the Barsburg Church located in District 7, and his job there is to protect the citizens by removing Verloren's messengers, the Kor. Labrador is seen spending most of his time in the gardens of the Church where he takes care of and converses with the plants there and makes them into herbal remedies. He is also able to manipulate them using his healing Zaiphon, meaning he is able to weaponize them.

The manga later reveals that he was originally born into the Krat Family, being a descendant of the ghost Profe, and after he died began serving as one of the Seven Ghosts. Labrador is the Ghost known as Profe, the one that is able to see one's future.

In the final manga chapter, he became an ordinary human and lost his Ghost powers.

Labrador is also the name of a dog breed.

'Rabu', from the romaji of his name, 'Raburadouru', is how the Japanese hear the word 'love'.

Ilyusha is a diminutive of the Russian name Ilya. Ilya comes from the name Elijah, meaning "My God is He". Elijah was a Hebrew prophet and miracle worker, as told in the two Books of Kings in the Old Testament.

Labrador's earliest appearance was in the pilot chapter Seven Ghosts. His character design and personality remain relatively unchanged. The only changes made to Labrador's design after the Seven Ghosts pilot chapter were that his hair was made wavier, his catsuit made tighter and darker and his earrings were removed.[1] Early Labrador still had the kind and gentle personality of his finalised character, but his movements were much less drowsy and he was much more energetic.[2]

Labrador first appears riding his Hawkzile when Frau crashes into Teito. He mistakenly believes Teito is a girl and attempts to remove Teito's tattoo by giving him a "prince's kiss". Labrador appears around the Church but his next major appearance is helping the other two Bishops thwart a military invasion using his plant manipulation to control rose plants and using their thorny stems as barbed wire.

Labrador as he appears in Seven Ghosts. 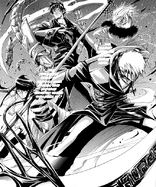 Labrador (top right) using his power.
Add a photo to this gallery

Retrieved from "https://07ghost.fandom.com/wiki/Labrador/Trivia?oldid=42765"
Community content is available under CC-BY-SA unless otherwise noted.