This article is about the species. For the manga chapter, see Kapitel 4

A Kor is a messenger and follower of the God of Death, Verloren. After Verloren's fall and imprisonment, the Kor continue to wage war against the Chief of Heaven like their master did, and seek humans in order to make a contract with them: tempting them with the prospect of granting them three wishes, but at the price of the host's soul.

Once a person has had their three wishes granted by a Kor, he or she becomes what is known as a Wars, at which point the Kor has killed the host and now inhabits the body. A person who is in the late stages of a contract with a Kor cannot be saved.

In the Ainu language of Japan, there is a closed class of 'count verbs'. The word 'Kor' means 'to have something'.

The true form of a Kor is that of a bodiless pair of pale grey, barbed wings about the size of a pair of man's hands. They appear to be made from bone, but bear little resemblance to the actual bone structure of wings.

The physical changes to a person that has been possessed by a Kor are a pair of skeletal wings that sprout from their backs, exactly like the ones the Kor has in its original form, only much larger. The human's eyes also glow red when possessed.

The Kor are notoriously sly and malicious. However, before their fall from Heaven, they were shown to be friendly and affectionate, especially towards the goddess Eve.

The Kor have a high amount of respect for Verloren and have been gathering souls for when he revives. They faithfully serve his current incarnation, Ayanami.

The Kor were attached to Eve, preferring to obey her orders over Verloren's and warmly welcomed her "home." They remarked that her soul is 'beautiful' and 'delicious', but Verloren quickly silenced them before she could overhear.

Ayanami is the current incarnation of Verloren, and as such, the Kor faithfully serve him.

The actions of the KorEdit

Those who follow the main religion of the 07-Ghost series believe that the creator, the Chief of Heaven, gives every soul three life objectives (dreams) to complete, which could be anything from making money to having a family. When the soul is born in a physical body, they do not remember these dreams. Discovering what they are and completing them is what makes life enjoyable.[1]

The Kor work by first finding a human being. They are not particularly choosy when it comes to selecting a victim, and their hosts range from old men to young children. However, Kor only choose a person if they have a complete soul, and they will refuse a host with half a soul.[2]

Once they have found their victim, they tempt them into a contract with the idea of instantly granting them the three wishes promised by the Chief of Heaven instead of the human having to work to have them granted, in exchange for the human's soul (effectively encouraging the human to 'sell their soul').

If the human agrees, the Kor then possesses the human, and 'signs' their contract by leaving its 'signature', the mark of Verloren (see the diabolical mark) on the chest of its new host, where the heart is.

Now that that they have found their new host, the Kor begin to grant their wishes, each one having a more serious effect on the soul than the last, until it has been tainted completely and that person is left unable to return to the Chief of Heaven.

Many characters in the series have been possessed by a Kor, including the Old Man and the Boy Kor, among others.

The mark of a Kor 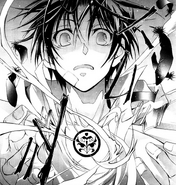 Once a wish has been granted, it is eternal, permanent, and cannot be undone by a wielder of a Baculus. Only the Ghost Zehel is able to remove the effects of the wishes.[3] Apart from Zehel, it appears only the Chief of Heaven can remove the effects, as he is known for allowing the corrupted souls a chance of redemption by reincarnating them. The effects of the granted wishes will remain even if the victim dies before all three can be completed.[4]

When a Kor first makes its mark on a human, they become mentally unstable.[5]

The Kor begins to affect the host's mind: the person loses sight of what their goals were, loses all their ambition and perseverance, and succumbs to depression.

When the second of the person's wishes are granted, the Kor begins to affect the host's body. The person begins to suffer from thirst that cannot be quenched by drinking and hunger than cannot be satisfied by eating.

The third wish results in the contract being completed. The person's soul will have indulged in too much so it is filled with darkness, meaning it is unable to enter Heaven in this life and has to be reincarnated.

The Bishops are then unable to reverse the damage to the soul, as it results in the death of the host. Since the body naturally dies after three wishes have been granted, a completed deal with a Kor will result in a premature death, since the wishes are granted early. The Kor then takes the host body for itself.

A person who has had all three wishes fulfilled is known as a Wars.

Attacking and removing a KorEdit

Kor are incapable of physically injuring a person, as they are intangible like ghosts, but they also cannot be injured themselves (as attacks will pass through them). Even when a Kor is in a human body, it is still impossible to attack the Kor with a standard Zaiphon, as it only injures the host body.[6] The wings need to be destroyed to kill the Kor.

The Baculus (バクルス), a device commonly used by bishops in the 7th District, allows those with either an attacking or manipulation Zaiphon to channel their Zaipon to attack or capture a Kor. Those with the healing type of Zaiphon are unable to attack a Kor directly, but are able to remove the Kor from the body of its host.

The only people who can remove a Kor are experienced Bishops, or people who have witnessed the removal of a Kor and have the skill to do so.

Since the addiction symptoms do not disappear so easily, a person is able to go to a correction centre if they need help in resisting the temptations of Kor.

It is possible that holy water does some damage to the Kor, as when a soldier was possessed, the civilians of the town started to douse the streets with holy water.[7]

Once a person has been possessed they show an increased speed, strength and endurance,[8] and can also use the Kor wings to fly. A newly possessed person displays the ability of bargaining with others, even if all three wishes have not been granted in the bargaining Kor.[9]

It is implied that the Kor cannot be seen by normal humans, and they are instead disguised as somethig less threatening, like birds.[10] The air is cold around a Kor.[11]

It is implied that a Kor has the ability to bestow a Zaiphon upon its host, as the Boy Kor said: "I can use Zaiphon now too",[12] implying he was unable to use it before. However, this ability is mentioned in the anime only, so it is unknown if this is true.

The tale of the Seven Ghosts and VerlorenEdit

Main article: Spirituality in the World of 07-Ghost

The Kor appear to be based on the devil in Christian belief.

The contract with the Kor draws many parallels with the 'deal with the Devil' in Christian belief as their deeds are similar to those believed to be done by the devil: seeking humans and tempting them to 'sell their souls' with the promise of wealth, power or any other gain. The outcome of a completed contract, like the real-world belief, is the damnation of the host's soul.

The oral agreement with a Kor results in Verloren's mark appearing over the person's heart, and this is similar to the belief that a pact with the devil will be evidenced by a 'diabolical mark'.

Retrieved from "https://07ghost.fandom.com/wiki/Kor?oldid=43413"
Community content is available under CC-BY-SA unless otherwise noted.