Frau is a handsome young man. He is the tallest character in both the manga and anime. He stands at 190 cm and weighs 84 kg. Frau has a very muscular build and this, along with his tall stature, makes him look very intimidating. His arm has the mark of Verloren's scythe on it, and on his lower back he has the standard Bishop tattoo.

Frau appears to be in his early to mid twenties, and although he looks physically older than both Castor and Labrador, an omake reveals that he is the youngest of the three Bishops. Frau has an angular, long face with a long, thin nose, a large mouth and narrowed eyes that are a deep blue in colour but appear indigo under certain light. He is always drawn with blank eyes when in chibi form, and several characters have commented on his 'criminal eyes'.[3] His skin tone is rather pale and he has light blonde hair that appears quite long, but is always spiked up. When Frau smiles with his mouth open, only one of his canines are visible,[4] making it look as if he has a fang.

Frau greatly resembles Guido, the previous vessel of Zehel, and also bears a fairly strong resemblance to his father. Another character Frau resembles is Fea Kreuz, something which Teito has noted. [5] Similar to Guido, Frau looks somewhat older than his true age.

Being one of the Seven Ghosts, Frau appears as a skeleton when in his true form.

In Kapitel 92, as a child in Teito's flashback, Frau was seen wearing a light-coloured top with a high collar and elbow-length sleeves over dark gloves, sneakers, long, striped pants, and a belt.

When in his casual clothes, Frau wears an ankle-length, leather trench-coat almost identical to the one Castor wears. Frau's is a lighter shade of blue (purple on the cover page of Kapitel 96), with a high neck-guard. It is tied around his waist with two belts, and worn open, exposing his bare chest. He wears a Bishop's 'dog collar' and a silver necklace in the shape of a crucifix, as well as black boots and gloves.

His sleepwear consists of a black, frayed top that covers his forearms in thin strips and exposes parts of his back, showing his bishop tattoo.

In his church clothes, Frau wears a dark blue cassock with white trimming on the collar, under a long white outer cassock that hides his arms. The cassock is held together with a loose belt and a large, silver, rectangular brooch emblazoned with the carving of a cross. Frau wears a plain, white mitre with a cross in the centre and a veil that extends from the mitre to fall over his face.

Following the death of Bastien, Frau changed to mourning attire, consisting of a simple black cassock that almost reaches the ground and a gold strip of cloth, that appears to be a modification of a stole, around five feet long, and worn around the collar. He wears a clergy badge on his collar. During the funeral service he also wears a black mitre, not unlike his church one, with a golden cross emblazoned in the centre and a veil that extends from the mitre to fall over his face.

In Kapitel 80, Frau attended Princess Roseamanelle's masquerade, and wore the appropriate noble clothing. He also wore a mask, although it was eventually destroyed during his reunion with Teito.

Like the other Ghosts and Verloren, when in his true form as a death god, Frau wears a black cloak with a hood, and always wears the hood up. It is likely that, after becoming Verloren's successor, Frau's death god's cloak becomes his permanent outfit. 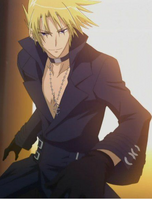 Frau in his casual clothes

Frau in his death god's cloak

Frau dressed as a butler

Frau as he appeared at the masquerade 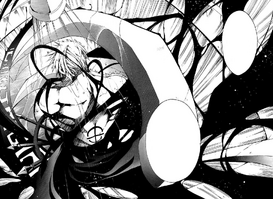 Frau attempting to control Verleron's Scythe while in the shower 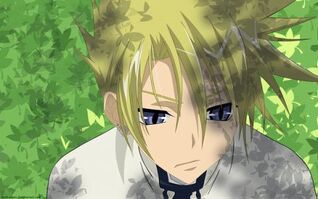 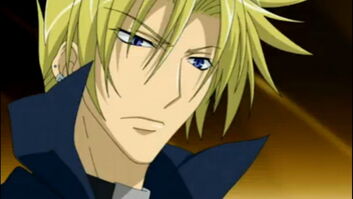 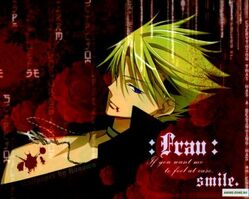 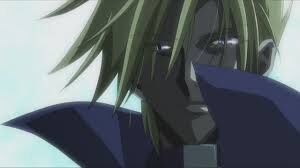 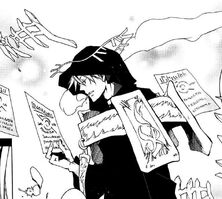 Frau can be described as an archetype of a "bad boy with a heart of gold". He is characterised by a stubborn and rebellious nature that he has had since childhood,[6]hot-tempered and prone to starting arguments with those around him, and often seen as rude. He is not afraid to return an insult or start a confrontation or fight, and will fight to defend friends from their enemies. He can be blunt at times and unlike his more diplomatic peers, will tell the truth whether others want to hear it or not. Frau has shown that he is adventurous and likes to take risks, as shown when he rode his Hawkzile recklessly despite warnings from Castor and Labrador. He once described himself as a "man of thrills" and is utterly ruthless towards most of his enemies.

His independent, confident, assertive and occasionally irritable personality can cause people to mistakenly perceive him as mean-spirited. While he wouldn't hesitate to make a joke at someone else's expense, his intention is never to seriously hurt. Frau loathes genuinely cruel people and is quick to defend underdogs.

Despite being a Ghost and a bishop, Frau seems to have less faith in God than his fellow Ghosts and other bishops, as shown by his blatant disregard of some of the Church rules, and also shown when he told Teito and Bastien that his god is dead. However, he does retain some faith in God.

Despite his gruff exterior, he is a very gentle and tender person. Although he appears physically tall and intimidating, the church orphans adore him, often getting him to play games with them. He has a childlike side and seems to get along very well with children (especially boys) as he took to caring for Capella very easily, even telling him that the job of a child is to eat, sleep and play. He has been shown to dislike hurting children, as demonstrated in his fight against Black Hawk Kuroyuri- he was unwilling to hurt Kuroyuri despite the latter being a capable fighter. However, he occasionally displays questionable behaviour around children, such as when he tried to show some church orphans a porn magazine and when he chain-smoked around Capella, though it is unlikely he genuinely meant any harm by it.

Frau is quite the ladies' man, flirting with and attracted to any pretty women he sees. He is also quite skilled at seduction and is not above using his looks to get what he wants, demonstrated in his dealings with Velne. However, despite his perverted nature, Frau can also be considered chivalrous and will not hesitate to help a woman in need out of genuine concern or sympathy. This is shown when he rescued Lady Marie from her demonic imprisonment, and also in the Drama CD, The Love Letter Which God Receives, when he is very polite to several old women who bathe with them, despite them not being to his taste.

Frau truly cares about others' feelings and is protective of his friends, especially Teito. At the same time, he does not easily show his emotions, as shown when he feigned apathy after Bastien's death. In a manga chapter, Teito was shown wondering: 'Why are you always hiding your (Frau's) wounds from me (Teito)?'. However, Frau does occasionally show a more emotional side, especially around Teito. When this side of him is shown, Frau appears to be rather haunted and desperate, saying that he is 'surrounded by darkness' and 'already dead'.

As a child, Frau was studious.[7] Teito said that it was as if Frau was 'pushing at his limits with everything he's got' in an effort to be acknowledged. Though it may not seem so at first, this diligence has continued into his adult years; he does take his work as a death god seriously.

Offensive Zaiphon: Frau has offensive Zaiphon. He is so talented that he holds the all-time highest score for the second part of the Bishop examination-- in which his light completely erased everyone's darkness. He is regarded as a prodigy by many, and exhibited extreme talent in a Zaiphon from an early age.

After Frau is forcefully separated from Teito by Ayanami, he becomes enraged enough to use Zaiphon on two separate occasions. The first time, he surprises Barm, Moz, Ryuu and Nene; the second time, even Castor is startled by how powerful it is.

Frau has demonstrated considerable skill at handling aircraft, handling not only Hawkziles but also complex military aircraft with ease. It is likely that his piloting abilities were honed during his years as a sky pirate.

Frau's ability as the Ghost Zehel is the ability to sever the bonds that tie a person's heart to misfortune. Like the other Ghosts, he has the ability to sense unholy beings.[9] Also, as a Ghost, Frau recovers more quickly from injuries than ordinary humans, and since his heart does not beat and his body does not give off heat, it is likely that he has a higher tolerance of low temperatures than ordinary humans. Frau himself says that his body is 'amazingly stubborn' (said to Teito in a manga chapter). Like the other Ghosts, Frau can shift between his human and Ghost forms at will.

Frau possesses Verloren's scythe, which he obtained when Landkarte forcefully put it in him. On one occasion, he used the scythe as a sword, to defend himself from Hyuuga's katana.

However, it is seen from manga chapter 52 that he is becoming corrupted by Verloren's scythe, as the scythe knows that Frau is just a fragment of Verloren, and thus will be compelled to devour souls too. In chapter 60, Frau, controlled by the scythe, tried to eat Teito's soul, but stopped just in time.

In manga chapter 95, it was revealed that by the time he was a young teenager, Frau had mastered four languages. He also learned to speak the language of Raggs, albeit not perfectly.

Being a god, Frau can understand the language of the gods.[10]

In the final manga chapter, Frau becomes the new Verloren. Hence, he gains the abilities of the other six Ghosts in addition to retaining Zehel's powers.