Those within the 7th District mainly rely on a diet of 'humble' foods such as grain, vegetables, and fish. [1] In the Church gardens grows an abundance of flowers that are harvested and eaten.

Flora is a major part of the diet for those within District 7. They eat many flowers that are standard ingredients in most meals, like broccoli,[2] and other nameless flowers that resemble daisies, but most of these are eaten raw which carries many health benefits of eating them cooked.

Edible flowers as part of the meal

Edible flowers on the table 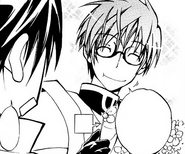 Castor eating the flowers
Add a photo to this gallery

Candy Flowers are edible flowers that have been soaked in either honey or sugar water. They resemble small, pink flowers in appearance and are made and sold by Labrador during the annual Bazaar of the Barsburg Church.

The flowers are healthy and also have medicinal properties, being good for the skin. The candy flowers are most likely based on real world edible flowers. Their flower type remains unspecified but they resemble peonies, which are edible. They only appear in the anime.

Retrieved from "https://07ghost.fandom.com/wiki/Edible_Flowers?oldid=40802"
Community content is available under CC-BY-SA unless otherwise noted.