The Black Beast Squadron were the counterparts of the Black Hawks. They were the armoured, elite guards of the Raggs Family and obeyed the King's every command. They may also have been affiliated with the Barsburg Church, as they were often seen with Fea Kreuz, a bishop. Unlike the Black Hawks, who are mostly Warsfeil, the Black Beast Squadron consisted of very strong humans. This put them at a fatal disadvantage during the Raggs War. 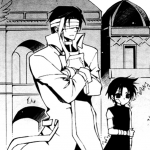